Since Bert Janssen had a whole story around the Lady of Guadalupe that involved the crop formation of August 12, 2009, I included a picture of it, when Judith Moore asked me which crop circles of 2009 had been important. On February 12, 2011 I received five transmissions related to crop circles of 2009. There was a report attached from Stuart Dike, director and photographer of the Crop Circle Connector, who had written about his amazement when he had entered the crop circle that had appeared at Wayland’s Smithy:

‘The revelation came when we counted the outer sections of the pattern, and realised the full significance. There is a clear and concise message here, as I’m sure it was no coincidence to turn up on the 12th August. This important formation with regard to its numerology, not only signified that this date was part of the message, but also of the overall design. On closer inspection of the design, there is a remarkable resemblance to Gothic architecture, especially rose windows, seen in many cathedrals from the 13th Century throughout many parts of Europe. Rose windows utilise geometry on three levels: manifest, hidden, and symbolic.

The 12 divisions throughout this crop circle design that are also typically found on rose windows all point to the finite and infinite, Earth and Heaven, or matter and spirit, and of course the 12 disciples. Numbers had a metaphysical significance in the 13th century, which is why they incorporated them into the Architecture at the time.  The same can also be said for the crop circle phenomenon today as this latest Wayland Smithy design demonstrates. Are we just like the pilgrims from centuries ago, gazing in wonder and raising subconsciously our awareness of the Divine?’

Judith commented: ‘The Rose Window crop formation that appeared on August 12, 2009 conveys geometric principles of the Power of Creation through a non-linear language that is not subject to the distortions of linear language or the interpretations later made by humans of the Living Word. The Rose Window is a clear and beautiful message from the geometries of Creation that speaks to the heart and the soul without agenda, direction or purpose to influence the mind of the seeker. As such is it a pure geometric language from the loving source of the Beauty of Creation.’ 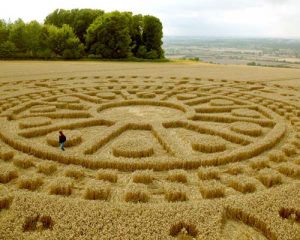 Message from the Oneness Source of Creation:

‘I am the Power of the One, the Force of Creation that is the catalyst for spontaneous [events]. I am the cataclysmic power within earthquakes and volcanoes and the power of universes when they fold into black holes. I am a consciousness but not a deity. I am a consciousness. I am formless of the Omni force. I am of what you call the Mind of God. My power is beyond structure and form. I am not a Creator and I express myself in many ways because the essence of the force that I am is not attached to what I have created like other energies that developed from the mind of the One Presence from parts of Creation and became deities. They became very attached to what they manifested and created with their imaginative capacity to manifest from the vibration of Source. They became personas that were occupied by ego, consumed with their godly powers.

I AM the Oneness power of Source. I have no such attachment to what was created by others. I seek out that which is in balance, that which is balanced with Source vibration of Oneness and universal cosmic law. I am the  power that is Cosmic Law. I am the force of Creation that creates action, reaction, cause and effect.  Life and death is that force that I am, I am the Oneness and that which is out of balance, I am totality. All cosmic forces have intelligence and capacity to manifest. I am the power of that which forms. I am the power that alters the patterns that are not useful or are not in balance with universal law, cosmic law, the law of One. The vibrations of this crop circle are frequencies from Source. The formulas of this crop circle are the formulas for the new hologram of Creation.

The Trinity of Sananda has entered the matrix of Gaia. This force ignites the Genesis of creation. It is a catalyst for the holographic Earth, fully integrated in a fractalline quantum essence. The Womb of Gaia receives the catalyst of Creation now which is the catalyst of Genesis, the catalyst of infinite power of Creation. The New Genesis must be a co-operative effort on a new level between the Mind of Man, the forces of Creation and the personas of the God force such as the Beautiful Ones that have come here to have persona and bring gentleness and Oneness. The teachers of the Way were the saints, prophets, gurus and wisdom keepers who came to Earth to prepare the consciousness of humanity for this great Genesis.

This must be a co-operative effort, a co-operative energy, a co-creation from the forces of All That Is, that life and death may be bridged. That Earth be the bridge of life and death and consciousness. Immortal life means consciousness eternal, an ability to know that life is eternal. Creation is infinite. But the deities that took power over Earth and declared it to be their realm, were agents of acting out duality and created the powerful forces that ultimately deteriorate because they are not of pure essence. They take from essence but they are not from pure essence. They manipulate power but they are not of that, they are not the essence of that. They are created and there is a difference between that which is created and that which is. I AM of the ism of Creation.

The crop circle message is a calling for co-creation with you on Earth. This is the soul group of humans who have become aware of immortal love and live by the Laws of Creation. As you awaken to the forces of creation that are at work in your soul you have evolved and now are able to focus your gifts on procreation in harmony with the Laws of the Universe. You are a bridge for the forces to manifest in harmonic cohesion stabilizing the hologram of your planet through the powerful transformative energies that are building to an apex.

My voice is the vibration that has found essence in tones, a way to express this creation power through the essence of life which is infinite and benevolent. I am Oneness. I do not come to destroy. I do not come to create. I am merely the expression of the power of Creation. An opportunity for humans to step beyond the dominion of those deities that have manipulated the experiment of duality, to step beyond that dominion into true and ultimate relationship as co-creators, not limited by those egos that limited the mind before the persona. For, in this opportunity that humanity has, there is only a focus on universal law, cosmic law, the law of the One, the Way, and the manifestation of pure form and pure light and ultimate balance. This is the greatest form of love imaginable.

The hologram of Creation is a weaving of harmonics orchestrated from the source frequencies that express variables in spectrums of light and sound. These are variables in spectrums of light and octaves of overtures of sound. The Great Maestro or conductor of this Harmonic Overtone and light configuration is the Master Mind of Creation. The frequencies are generated by forces that form a continuum and harmonically refract energy. These formulas generate energies that form thoughts in human consciousness that is aligned with the force of creation. These thought forms are manifest as physical energies in the world. They are established thought forms that become physical. The matrix of Creation forms mass and matter. Form is the holographic mirror for the expression of these harmonics as they are woven through the hologram of Creation. The power of that which is formlessness takes form. The hologram of Creation that is pure vibration and cosmic light particles take form in the hologram of Creation. This formula is expressed  in a myriad of diverse harmonic patterns and spectral light frequencies.

There is a spiraling of these energies like the cosmic spiral, a movement always flowing out from the center and returning to the center. These cosmic particles contain intelligent codes, blueprints for the physical reality. The formulas in this crop circle receive them, creates blueprints of patterns and frequency forms that emerge as the New Holographic Earth. These are the forms that have evolved from the Primal Form to be present as complex dynamic energy. This is the relationship of particle form, frequency and the light spectral continuum. These frequencies require the mechanisms of time for the cosmic spiral of intelligent energies refract from a particle.  DNA exchanges light codes, DNA helixes spirals of fractalline forms of light carry codes, which are harmonic frequencies that build the concertos and the holograms of Creation. 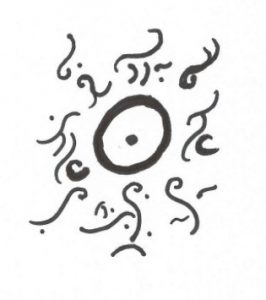 Light symbol expressing the message belonging to the crop circle.

The Trinity Ray of Sananda is the holographic lens. It is the fractal of a greater fractal and that fractal is important Master Consciousness that in its ability to refine frequencies. The Trinity Ray of Sananda engages the intelligence of Source Creation in a pattern of Christ vibration. The Christ is the ultimate expression of Source of Oneness, source of Creation. The Christ is harmonic balance and infinite compassion. The persona of Jesus the man is a projection from Source creation of the perfect blueprint of creation. That is why he is called the Son of God, he is a perfect DNA hologram of the blueprint of Creation. He is immortal, thus the DNA is active in the physical DNA of the planet. The Trinity Ray of Sananda contained in this formula is a Ray of Creation that activates the Christ code or the Jesus DNA. The original pattern of infinite Creation that is manifest from I AM Oneness, the Source of All That Is.

The hologram of the Trinity Ray of Sananda is the DNA that forms physical DNA helix of harmonic frequencies of light and sound, that is the blueprint for Creation. It contains primal form, an expression of manifest Creation that is not limited to primal form or the expression of manifest Creation as it is spiraled and its spiral is in the phase of the evolution of Creation, the fractalline universe evolving, ever evolving. Evolving the pattern of universal order and relationship to the physical and the non-physical world or what you call existence beyond the veil and your hologram of perpetual motion in quantum form.

The purpose of the crop circle is to bring all these powerful vibrations into a visual field of creativity.  The invitation is to enter a meditation with the set [of crop circle and light symbol] and open to the Omni Power of Source Creation. Allow the Harmony of One to flow through you with the intention of activating your DNA and the DNA of the collective with the powerful formulas for creation contained in this set.’