Judith Moore: The Grail is the Key, the Cosmic Key encoded in the Earth by the God Force. This encodement is primed for Genesis. Just as the DNA of new life is encoded for Genesis, the Earth is encoded in the same bio organic force of Creation. The DNA of the planet is specific because it is the Sophia of the Key. Sophia is the Cosmic Key that opens Galactic planes to synergize cosmic forces with Galactic source and Source Creation. The Grail is the heart of the consciousness of One. By the nature of the Creation of humanity, the Grail is essential God particle in the cosmic dynamics of human DNA. The Grail is physical and non-physical.

The Elohim descended to Earth as the Great White Brotherhood… The Mystery schools were not limited to any particular social doctrine but the masters moved between life times, consciously incarnating from that soul particle [that] carried the Keys to Cosmic Order. Returning always to the soul particular between incarnations to the Source of Sophia, of the Great Cosmic knowledge of the Great Wisdom and incarnating clearly into specific bio energetic fields on the planet. This took millennia, ages, for a cumulative factor to acquire the access to the Galactic Keys and the triggers on the Earth plane integrate in the ley lines, the points that are a mathematical formula on this planet of great systems.

Not one part of humanity had the full blueprint. Each aspect was developed before the global village, before the time that is now, the Time when all Nations of mankind come together to share, to resolve differences that would separate them. The Masters who carried the ascension keys incarnated from the Great White Brotherhood, the mystery schools, to establish inference patterns, infusion points, triggers that were calibrated carefully to formulas such as the Pythagorean formulas and the Pythagorean keys are essential to the planetary keys. The Pythagorean keys are essential as this is a name for a master who also incarnated in the pyramids of Meso America with a soul group that specifically prepared the Earth through the Omni mind and guidance from the Beloved Benevolent One.

The essential awareness is that there is a collective group of souls who have not had random incarnations but specific blueprints for this purpose. They are a cosmic family and their soul particle is encoded with the Sophia. It is essential knowledge, wisdom, the essence of love.  The Grand Plan for humanity has been an agreement on the part of souls that have agreed to build civilizations to generate bloodlines and create collective thought forms of those civilizations in specific energy centers of the planet that were originally part of the planetary blueprint for this time of the Coming. 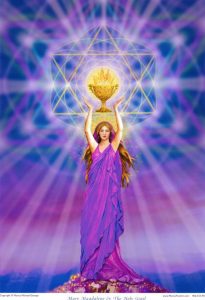 The Grail is awakened. The Grail has awakened the Keys of Prophecy and it is by the Grail Code that the Keys of Prophecy may be turned. There is a pattern and the journey that you have engaged in was synchronized with a collective soul group in action, ceremonies and events on the planet that were synchronized. These days have been synchronized. These events have been synchronized through collective intelligence and Omni guidance. Beyond your comprehension as humans, there is a plan at work. It is the Great Plan Prophecy. When a significant critical quantum group of souls attune to the perfect guidance, faith, they moved into the capacity to engage in this Great Plan Prophecy to synchronize energy systems on the planetary grid for a collective experience. It was not possible for that collective experience to be a left brain experience. It had to be through the Cosmic Mind. This collective experience that has evolved through these years of prophecy, a time of prophecy.

The Galactic Maya carried the formulas for the timelines. The calendar systems organized vibrations into manifest forms and only at this time in the Great Plan Prophecy could the Galactic Mayan Keys come together with the Grail and the Pythagorean Key. This understanding may be used to review the 11 year journey of prophecy that began on Spring Equinox of 1999 and the awakening of the visions of the Mag Da Ha Ma Ha Da. The Magda and the visions of the Magdala are both a collective and a unique individual experience. For the visionary has visions for the collective and through the powers of visions, the collective vision is awakened.

The Gift had to be opened in a progression of prophetic journeys. The Chronicles of Ibis is the Master Key. It is the Key of the Records of Creation. Now the Eagle and the Lion opened through the union of the Beloved Yahweh the Christ Code is complete. This has to be individual experience and a collective experience consciously witnessed, participated with individuals who carry specific alchemical codes in their DNA for the Prophecy of the Prophecy.

The Grail through the journey of the Chronicles of Ibis and the visionary, the messenger, the Grail unlocked in France 2007 opening the journey of the Keys of Prophecy. The alchemy is accumulative through the Cosmic forces, specific alignments, specific stellar solar gates, specific knowledge that is so vast no individual can carry this knowledge. The only way to follow the Path of this is through inner guidance and faith. Once the Keys of Prophecy were turned in the Trinity Key, the central force of that Trinity Key was the union of the Galactic Time Codes of the Galactic Maya, the Pythagorean formulas and the Grail. 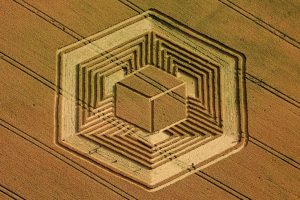 The Eagle and the Lion are specific lineages of light, soul lineages, cosmic lineages, genetic lineages that ignite the Grail, complete the Grail and open the Grail to be fully embodied on 7-27-10 (which incidentally was Judith’s birthday) with the Grail ceremonies in Glastonbury. Each of the crop circles that appeared carry specific cosmic formulas, layers upon layers. These crop circles are an accumulation of cosmic forces. For the formulas began as the planet opened from the simplified formulas to the complex geomancy of the Earth, the geometric formulas, the ascending formulas.

The crop circles are ascending formulas, accumulative factors as many crop circles appear where other formulas were integrated into the Earth energetics and dynamics, there is an accumulative pattern and it is all part of One Hologram. And every single crop circle is part of that hologram. To even to begin to understand the totality of this Prophecy of the Prophecy is to depart from logic and enter a state of union with the intelligence of Creation which is the mechanism that moves the Prophecy of the Prophecy and now moves human affairs, attitudes and perceptions. And this is the Great Awakening.

There are specific patterns that can be recognized through the archives of the Chronicles of Ibis but those patterns are simply Keys to greater doors like index systems for libraries. And the 13:13:13 is a collective ascension key. The 13:13:13 is the Ascension Key and it is a global key. But the calling together of the 13:13:13 provides a space of focus and intention for a specific group, collective group, that can identify themselves as participants in this Prophecy of the Prophecy and as individuals who are fulfilling the mission of Ascension by their individual prophetic journeys.

The Greater Prophecy of the 13:13:13 is carried within a collective human experience of ascension souls that are global and that is the critical key. The Key to the God Particle is a human experience of a specific quantum number of individuals that respond to the Harmonic vibrations of Genesis and the Golden Genesis is the Harmony of the Harmony of One, the tetrahedron light, the intelligent light of Creation, the intelligent harmonics of creation.

And this is an overview of that journey of prophecy that must be physically engaged with certain energy centers on the planet and this is the directive that must be followed because the formula is completing itself. It has reached an apex when the Lion and the Eagle came together in the Christ Code. It is like the merging of Jesus and his twin. With all Creation elements there must be a harmonic polarity. That is a factor in Creation.

This transmission calls those who are aware of this into an opportunity to focus on the broader perspective. For each person who has been part of this prophecy has an opportunity through this transmission to broaden the horizon of their perspectives and in this great tapestry each individual has had to focus on a specific weaving. A tapestry is woven by the Master. Remember you are part of a weaving that through you the Hand of God weaves and this is the Master Tapestry called Golden Genesis.