Laiolin through Judith Moore: ‘The formulas in this crop circle are the time frequencies of the new 2013 Galactic Time Spell of the New Calendar of Creation. The old 2012 Calendar system is ending. This crop circle contains the Galactic Time Codes that enter the Earth holographic fields as resonant time frequencies of rhythms from Galactic Source, Source Creation. The nine circles, in this system, are the planets in your solar system. Venus is seen with the crescent Moon at the top of the formation. This means that she is the cosmic messenger. Through her the time codes of the new Galactic Time Spell are received.

The Lunar cycles receive the new Galactic harmony and transmit the frequencies from the Venusian systems through waves of cosmic energy into the harmonics of Earth. Think of tides in the ocean that are in rhythm with the cycles of Creation through the rhythm of the moon. This is the relationship of the Venusian system, the lunar plane, Earth and the Great Solar Sun of Creation. All of the new Galactic Time Codes are present in this circle. The following message from the Morning Star (Venus) takes you deeper into the understanding of what this means.’ 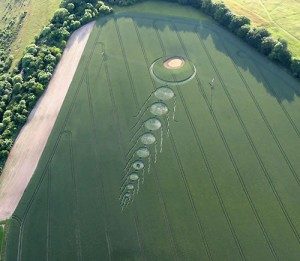 Message from the Morning Star:

Beautiful Ones, You are the radiance. You are the point of illumination. I am the Morning Star. The prophecies of many cultures have foretold of my return. My return announces the return of the Prophets of Peace. My return marks the beginning of the Eagle Count Calendar of the 2013 Time Spell. The old calendars end now, time as you knew it is no more. The rhythm of Earth changes to a new Galactic rhythm. The rhythm of Earth enters a new Galactic plane, it is an ascension plane. The 2013 Eagle Count Calendar is the calendar of Creation that marks the first cosmic day of a New Cycle in Creation.

The people of the Morning Star have watched the heavens. The people of the Morning Star know that Venus is my sign. Venus is the first planet to be seen in the evening and the last to leave the sky in the morning. Venus is the goddess of Love. I sent prophets to Earth to bring the teachings of peace to humanity. My light gave you strength to make it through the long dark night to the time of the coming of the dawn of a new human era. My light shines brightly in the heavens and announces the dawn of a new day.

You have waited long for the time of the coming of the Dawn and you are the Ones, the Bringers of the Dawn. Celebrate the celestial realm. Celebrate the knowledge of the coming of the time and the Calling of the Time. Celebrate that the knowledge of Oneness will be known by humanity. You have watched as the darkness of the soul gives way to the gentle light of the First Day of Creation. It is a day made new It is the beginning and the end, the meeting point of the cycles of Creation. You have watched for the signs of the end times. You have felt these signs; you have witnessed the magnitude of the shift. Deep within the wisdom of your soul, you have been prepared to recognize the signs. You have come together as a Community of Faith to make this journey. It has been a journey of much chaos, confusion and healing. Your faith sustains you.

The light of this New Day of Creation flows gently across the Earth and infuses consciousness of humanity with a new capacity to love. The awareness will spring forth in different places at different times. It is a dawning of a New Age. When you watch the sunrise, if you stand in the shadow of a mountain, the sun’s rays will come to you at a different time than if you stand out on a flat plane. If you were on one part of Mother Earth, you will see the sun’s ray at a different time than on another place. This is the way it is with the First Day of Creation.

The power of a new Galactic Time Spell is the rhythm that is called the Eagle Calendar. It is the first Calendar of the 2013 Time Spell. The Solar Ray from the Galactic Source penetrates all fields and dimensions. It is like a sun dagger that pierces your reality and enters the center of your existence to mark the point of entrance when Eagle Calendar begins. A New Day is made. Some of humanity is still completing the old calendar, but there are those who are living in harmony with the Eagle Count Calendar. You will experience a new Divine flow and rhythm. Those of you, who are living in the Time Spell of Eagle Calendar, your energy is guided by the first Wheel of Creation. Your reality is different than the reality of the past; you are living in a different world. On this, the first day of Creation, the radiance becomes greater. Your DNA is altered by the light of Creation. It is the light illuminant from the Source of your soul. It is a harmonic light form that completes you as a soul. It actually alters the nature of your soul and the soul’s capacity to know itself as Oneness.

This is the beginning of the activation of the new human DNA, the Eva Adam Kadmon Blueprint. Through the opening of this DNA, there is new potential for manifestation and creative possibilities for the way that Creation organizes itself in the world of Beauty, the place of Oneness. You are the playing field for this, as once you were in the agreement to be in the playing field of duality. You have crossed through the narrow gate.

The Bearers of the Eagle Calendar are the ones who live in the rhythm of the 2013 Time Spell already. You are already in that Time Spell. In the 2013 Time Spell, you no longer have the agreement to act out and dance with duality and dichotomy. Your agreement is one of absolute cooperation with the forces of Creation. This is a time of great change in the way you perceive the world; you will adjust to this new state of being. At first, you will have times where you will need to get used to the way that Creation is. You have to divine a new way of interpreting your reality. This is the time of transition. You are living in the vesica pisces, the place where two calendar systems overlap. You will observe the way of the old world changing around you. You can assist that only from one space, from the simplicity of your soul as a radiant being and as vessels of light. This is the radiance in the world that illuminates the Living Hologram and manifests the elements of Creation for the birth of Oneness.

You may come and go as you please. You are not separate from people who are still making that journey of duality. You can be with them in a deep and real way. You are not separate. You can share their journey. You can encourage them. But you will not be capable of living in chaos and disharmony or having greed. It will not be the way that you are. You will not be capable of being part of that old world but may participate in the transformation of that old world. So you are capable, equipped and ready for this dance of illumination, radiance and peace.

This does not mean you will not know sorrow. You will know sorrow because sorrow is part of your emotional body. But in your sorrow, you will not be absent or separate from anything. When a loved one crosses, you may feel sorrow and grief but you will not feel separate. What has been so painful for humanity is that when their loved ones cross, they feel separate from them. They feel something has been taken away from them. They feel a loss. The sorrow that I speak of at the time of the death of a loved one will be different. When they cross you will be able to feel them, communicate with them and sometimes even see them. You will not have a sense of separation from them. You will know that they are in the world of Creation with you. Even though you will miss the life that you had with them and you will celebrate the missing  through the sorrow. You will not be in the grief of separation.

The old calendar systems are still completing. These formulas that support duality will not be present in the new calendar system, it is a new galactic formula for time. The rhythm will establish itself as the Wheels of Creation meet in the point of illumination. The ones of you who have stepped across the threshold and are living in the  First Day will have less of a need for attachment to linear time. Be aware that you are living in the rhythm of balance of the Divine because the Eagle Calendar is the Divine Way of Oneness. You are not separate from the linear and spherical fields.  This calendar system is a cohesive formula.  It contains formulas for cohesion, clarity and balance. Truly this is a shift in the nature that reality is formed and manifested.  I have come to bring this message. I am the Morning Star.

Herbert: I started to put some transmissions on crop circles on the internet. They are derived from a manuscript of Judith Moore and me that will never appear. Parts of it have been translated into Dutch. Transmissions related to crop circles of 2009 can be consulted in our book ‘De spiegel van Magdala’ (‘The Mirror of Magdala’). But the tranmission that contained the message from the Morning Star appeared only on the Dutch website of Judith. So I decided to make the English version available. The year 2009 was the year we went through the Eye of the Needle. That will be explained later. The planet Venus returned at the beginning of April 2009 as Morning Star to start a new cycle of eight years.