The power of the Living Grail

Judith Moore visited the crop circle area of Southern England in July 2010.  When her transmissions on crop circles were transcribed by Sean Sands, it turned out that one of the crop circles contained energetically the thirteen Books of the Golden Covenant of the New Jerusalem. I recognize the design of the crop circle as a tesseract, as the projection of a four-dimensional cube. But what really interests me is the message by Mary Magdalene related to the crop circle. It says that the power of the Living Grail has been revealed.

Mary Magdalene through Judith: ‘We receive the books as the libraries to contain the Books of Knowledge opened through this field of grain Through the fertile loam of human souls, this crop circle was given by the Elohim of Peace through the constellation you call the Bear (Arcturis). This crop circle is a key of Prophecy that opened the sealed archives of the Gospels of the Living Word. We, Jeshua Yahweh and Magdala, received this prophecy through our living bodies and through time and space because we are immortals. We offer this gift to humanity now because it is the time for the resurrection of the Earth. _The old prophecies are fulfilled, humanity must have new prophecies to guide them to a new age of peace and sacred relationship with the I AM Oneness. The frequencies of this crop circle is a library of light, it contains thirteen Books of the Golden Covenant of the New Jerusalem. _

_This crop circle is a Grail, a master Grail formula. It contains the Grail codes of the Holy Graiel (or Cosmic Grail, the Womb of Creation), the sacred blood of immortal life. There are deeper understandings to the mystery of the Grail that go beyond the capacity for humans to understand the bloodline, the cosmic forces and the locations of certain nautical charts of the greater astrology. The reason this word nautical is used is because they are charts that navigate the cosmos. In this crop circle there are nautical charts that contain contact points for the astrological alignments that will bring powerful changes to the world. It is a formula for transcendence and opens the Gateways of Infinite Creation, Eternal Oneness and Immortal Life. _

The powers of the vibration of the formulas in this crop circle empower wisdom, truth and the power of prophecy. The Magi read the formulas and the greater cosmic field for the knowledge of the birth of the Christ. They knew that powers of cosmic forces aligned to allow a powerful force of transformation to be received on Earth. This force of transformation is the key for the resolution of duality and the healing of the suffering of the world. The alchemy in this formula is deeply contained in the mysteries of Osiris and Isis. The Egyptian Book of the Dead revealed the secret formulas of the Immortals restoring Osiris. This crop circle is an Osirian Formula for the transcendence of the End Times.

_The power of the Living Word of the New Jerusalem restores the integrity of the divine relationship of the beloved union of man and Creator. The spirit of humanity feels this union and is lifted by the light of God and restored to wholeness. This is the immortal union spoken of in the mysteries of Osiris and Isis. This is the beloved union of cosmic forces that heals that which was fragmented and brings wholeness. _ 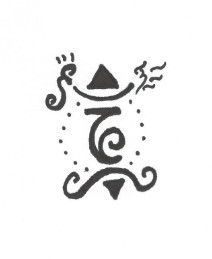 Star glyph drawn by Judith, belonging to the crop circle at Fosbury.

Each Star Glyph is a living library of information. See: Crop Circles Revealed.

This Grail brings upon the Earth the power of the Blood (Life force) of the Living Covenant which no soul can deny or turn their face from. It shall open the seeds of life, the eyes of truth and the ears that hear and receive the prophecy of the One Living God. The Prophecy of One is a living prophecy that shall be received in the hearts of humanity. This prophecy guides humanity to follow the Path of the Immortal Way. The Way has brought you to the Path of the Immortal way. This crop circle carries the Grail codes for the immortal life of Earth and the resurrection of the human soul.

You are invited to journey deep into the realms of the Grail mysteries with new meaning and purpose. Many have sought the mysteries of the Grail; it is a living force now, no longer a lost secret. The power of the Living Grail is revealed. It is the Divine force of Union with the God Self that channels love into the world. There is not a force on Earth that is capable of healing that which is fragmented in the soul like the Living Grail.

You are Isis and you are Osiris. You are Jesus and you are his beloved Magdala. The power of this Grail awakens you to unlock the hidden mysteries that were once forbidden. The time has come when these mysteries come to life and are used for the resurrection of the world and wholeness of the human soul. You are no longer lost souls, the Living Grail guides you home to peace. This is the force and the power of the gift of this sacred circle.’

For more information about the work of Judith, visit www.recordsofcreation.com