In October 2001 I found a book by peace troubadour James F. Twyman entitled The Secret of the Beloved Disciple. Even before reading it I had a dream in which I had an unknown destiny and I was walking with an urn through unknown territory. Finally I arrived at the house of a peace troubadour. The dream marked the beginning of my spiritual awakening. When I started to read Twyman’s book I was touched by the messages that he reported to have received from Mother Mary. If these were true, she had told him in March 1997 that there are two manifestations of the Christ energy, one masculine, the other feminine. The new world would be a shifting of poles. After two thousand years during which the masculine Christ stood central in the public attention, we would open ourselves to the feminine nature of God: ‘It is time for the reemergence of the Feminine Christ, the compassion of God which has always been present in the world but which has slept beneath the blanket of illusion.’

The next time I heard of the Feminine Christ was in January 2008, when I attended a presentation by Johan Keijser about the crop circles of 2007. He showed us a beautiful crop circle design from July 2007 that had been called ‘the Butterfly.’ Laiolin is the higher dimensional guide of Judith Moore. According to the message from Laiolin the crop circle marked a time of new prophecy. I knew already that the date 07-07-07 marked the beginning of a new cycle of Creation in which the feminine principle would no longer be suppressed. But only through the transmission about the Butterfly I heard that the Feminine Christ was related to the descent of the Golden Jerusalem. 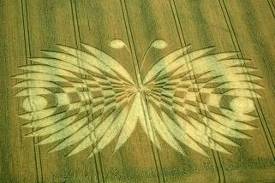 ‘This is the transformational symbol that will guide consciousness for the next phase of opening to galactic corridors of light to emerge the Christ consciousness. This crop circle is the symbol for the Union of the Beloved, which is now taking place within the heart of humanity. The formula in this crop circle facilitates the inner-dimensional communion with the Cosmic Christ vibration. This formula opens galactic portal regions of the universe that have developed the Christ vibration to a sustainable level. These regions are called the heavenly realms. The openings of these galactic portals allow the full emanation of those frequencies to be received on Earth as it is in the heavenly realm.

Earth was introduced to the Christ energy through seven sacred incarnations of the Christ in the third dimension. The Son of God implies that Creator sent an Omni-existent vibration of Creation energies to Earth as a vessel of pure love and light in the form of a human. The Christ came as an emissary of Oneness, as a mirror of divine truth. The Christ came to prepare Earth for the initiation into a vibration of love called the Beloved, which is union with Source. Making way for the incarnation of the Holy Nuptial, the Bride of Heaven, which is the descent of the Golden Jerusalem. You know this being by the name of Mary Magdalene, the Feminine Christ.

_The infinity symbol predominates the sacred geometry of this crop circle; communicating the opening of an infinite plane of energy that is of the Christ vibration. The infinity symbol is moving into union, emerging into a vesica pisces.The vesica pisces is the symbol for Mary Magdalene as seen at the Chalice Well in Glastonbury, England. _ 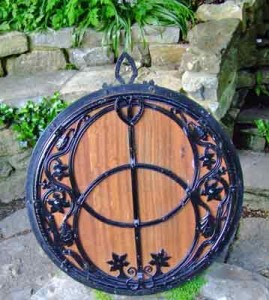 The lid on the Chalice Well at Glastonbury.

The tips of the wings hold two orbs of pure Christ energy that travel through the Cosmic Christ corridors of light to enter incarnation as a man and a woman. Through their holy union the way is made for humanity. The Beloved meets at the point of infinity in the very center of creation. The pure source energies embodied by these two beings open humanity to ultimate transformation and awakening.

The energies of this crop circle replicate the frequencies from the alignment of cosmic forces only possible during the completion of the great cycles of time. These powerful cosmic forces prepare Earth for the emergence of the new cycle. Earth is experiencing an alignment with cosmic corridors of energy that are only possible during vast cosmic alignments. Thus was the prediction of the birth of Jesus the Christ by the Magi. This crop circle carries the formula for what is known as the Magi Code.

Star glyph drawn by Judith to accompany the picture of the Butterfly.

_The formulas of fractal frequencies emanated from this set of crop circle and star glyph quicken this powerful cosmic force in the collective of humanity. Each DNA strand is like the strings of a harp awaiting the touch of the master, this crop circle is that touch. _

_The very appearance of this crop circle marks a time of prophecy. A time when the very foundation of consciousness is being attuned to a pure vibration of union with the creation forces. You need not concern yourself about future outcomes or predictions. Simply be in the vibration of faith and union and your light body will carry you through any challenges in this time of transition. The chrysalis of the butterfly opens and your soul emerges as a Christ light, infinitely able to love and be loved.’ (Judith K. Moore _© 2008)