In August 2013 I completed a manuscript based on the transmissions of Judith Moore. It is entitled Creation, Union and the Feminine Christ. When it will appear I do not know. This manuscript contains some transmissions on crop circles published before in The Language of Crop Circles, now out of print. Johan Keijser is the co-author of this book. He devoted the last years of his life to the Holland Crop Circle Project that was dedicated to the cosmic meaning of crop circles from Europe and North America. Johan Keijser was a dear friend of Judith who inspired her with his dedication to the messages from the Arcturian Crop Circle Makers.  Johan crossed on September 3, 2009.  He was still able to edit in Dutch a book about crop circles up to the year 2008.  In a deeper sense his work was dedicated to the Holy Grail being the blueprint for the New Creation. Judith and I thank the heirs of Johan for their permission to publish parts of The Language of Crop Circles. 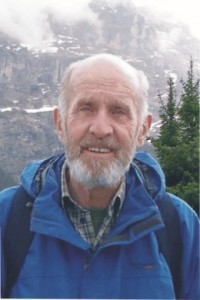 Johan Keijser has succeeded in 2004 to find a crop circle in Boussy St. Antoine, a suburb of Paris. Children of a nearby Lyceum might have contributed to the design. Nevertheless the Arcturian circle makers have used the crop formation for the codes needed to awaken the power of the Holy Grail. Judith Moore receives messages on crop circles by visiting inwardly master archives which she situates in the Dragon Hill with the White Horse near Uffington. This time something quite unusual happened:

‘As I entered the archives of the Dragon Hill and stood on the golden platform where I received the following transmission, immediately six masters appeared before me. They were all dressed in beautiful green temple robes that were trimmed in gold. They told me that the records for this crop circle were sealed and that the opening of them was an act of prophecy. They said that they have been observing me as I worked with the archives. When this formula was sent to Earth they accompanied the process as guardians.  I knelt before each of them and they placed their hands on my crown chakra and spoke a mantra in a language I have never heard before. I could feel the power of this in my body in this dimension. I felt it was an initiation.’ 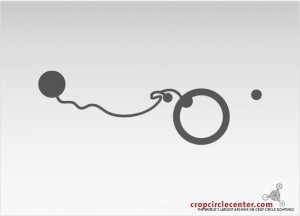 The masters of the Holy Grail through Judith:

This transmission is not religious in nature, kindly disregard any prior existing notions that you may carry about the cup of the Grail.  This message is not about Judaism; it is about a family of man that has spread across the planet. The family of the living Christ carries the codes for awakening the Christ consciousness. The Holy Grail unites all peoples on Earth under the protection and the guidance of the ultimate benevolent source of love that guides the children of the Most High to awaken and know themselves as divine. 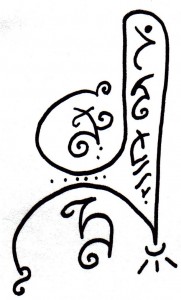 The crop circle and its accompanying soul glyph (see above) awakens the Grail codes that have been seeded throughout the DNA of humanity. The true Grail is in the DNA. The true cup of the Holy Grail is a mystical force that awakens humanity. It is found encoded in the 13/13 DNA code. It is as powerful as the Ark of the Covenant. That is why it has been hidden from those that would misuse the power it contains.

The descent of the Grail was at the Tor in Glastonbury. The physical Grail that history speaks of came to Earth when Jesus was thirteen years old. King Solomon received the power of the Grail in ancient times before the known incarnation of King Solomon. This was the time of the ancient I AM cities, a time lost in the memory of humanity. 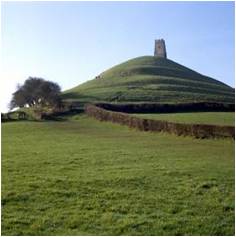 The crop circle and soul glyph are to be used in meditation to activate the Grail codes, and send forth a call for unity of all of the brotherhoods of life for the cause of revealing the true cup of the Holy Grail and Peace on Earth.’