Wally was born 12/18/66 and is now (September 2005) 38 yrs. old. He lives in the Clifton Park area of upstate New York with his parents. Wally has lived at home all of his life. Wally has two sisters, one a year and a half year older than he and the other is two years younger than he is. Wally has a large extended family and many friends. Wally was diagnosed as autistic at age 2. He developed epilepsy at age 9 and has GM seizures. Wally has some slight involvement with CP, Tourette’s Syndrome, and OCD.

In early February of 1992 when he was 25, Wally was introduced to Facilitated Communication (FC) to be used as a means of communication because he is non-verbal. During September of 2002 Wally was diagnosed with ALS, a terminal neurodegenerative disease. As we look back, there were signs and clues as far back as 1997 that Wally was beginning to suffer from some type of neuromuscular problem but his doctors were not able to pinpoint anything until September, 2002.

Wally attended various day programs that were available from the time he was 3yrs. until 1998. During 1998 Wally told his parents that he did not want to continue on with the day program that he most recently was attending because there was nothing there for him that would stimulate his mind. At Wally’s urging, a decision was made by his parents that allowed him to stay at home and work on his writing. Wally was able to participate in two college level courses, one in Human Services and the other in basic Chemistry. Wally was scheduled to take a Sociology course at a local community college but because of his deteriorating health he was not able to attend the course. He did however do all of the required reading for the course. 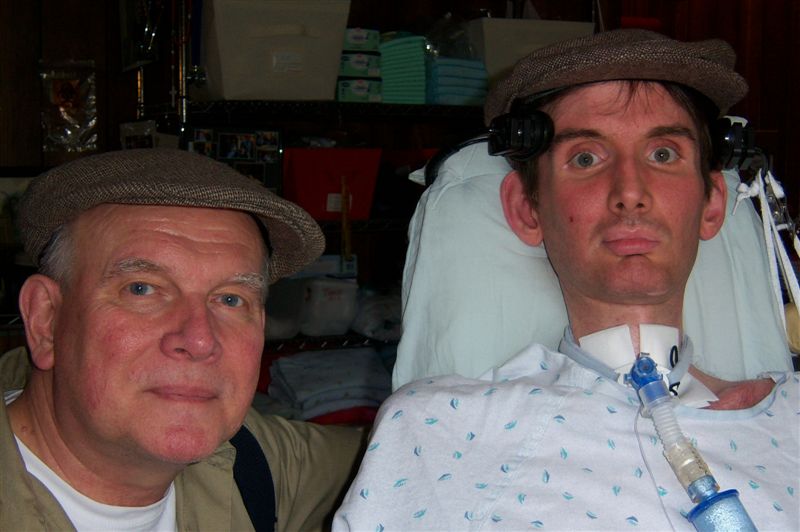 At the present time Wally is still able to write using FC, a laptop computer, and a special hand and finger brace. Wally was well on his way to typing independently. He could type a word or two on his own without facilitation and could type with no problem with one of his facilitators holding on to his shirt. His quest to type independently slipped away from Wally by the end of 1998, when the effects of the progressing ALS continued to rob him of both muscle strength and control in both arms and hands.

Since 1998 Wally has slowly lost the use of his legs, left hand and arm and of all but his index finger on his right hand as a result of the slow neuromuscular deterioration caused by ALS. At this point in time it is not known how long he will maintain control of his right index finger and be able to FC. Now Wally FC’s almost every day for a few minutes to two hours. Previous to the onset of ALS Wally was able to FC up to five plus hours per day. At present a portion of his time each day is taken up with PT and OT which are necessary because of ALS and his deteriorating physical condition. In addition to writing he enjoys reading, listening to classical music and books on tape, talk radio, and visits from his family and friends.

During February of 1992, at the age of 25 years, Wally first used FC as a means of communication. Since that time FC has been his primary means of communication. Wally uses FC to communicate with his family and friends and to write. FC is a slow process for Wally. It takes him 8 to 10 hours of accumulated time to type one page of single spaced type. Through his writing Wally has been able to assist college students with their course work and term papers  that they have written on autism or on the autistic person. Some of Wally’s work has been presented at various autism conferences, published in newsletters, and published in books and articles about autism. In 2001, using FC, Wally told his parents that he wanted to speak the words that he writes. As a result of this request Wally received speech therapy and was able to ask and answer questions with single words or short phrases. At the present time, because of the effects of the ALS, Wally has lost almost all of his ability to speak. Wally still relies on FC for his formal communications and for longer conversations with friends and family as he did in the past.

Clarifying notes by the author (04/08/2009): PT is Physical Therapy. Because of the ALS and its effects on Wally’s muscles and nerves, he must do special exercises to keep his joints moving. Each joint in his body must be exercised every day, otherwise he will become very stiff and will not be able to bend or move. There are special exercises for him to do. Because he can no longer move any part of his body on his own, we must do these exercises for him by moving all of his limbs, fingers and joints. As a part of the PT program, Wally will also receive massage treatments.

OT is Occupational Therapy.  As the ALS progresses through Wally’s body, he would slowly lose the ability to use a part of his body. For example, when he lost the use of his right hand, he could no longer hold a cup or eating utensils (knife, fork, spoon) so he had to learn to do some functions with his left hand while it was still functioning. As Wally lost a function in one part of his body he had to learn how to cope with the loss by training another muscle to take over the job of the muscle that lost its functioning.

The ALS attacks the nerves that go to the muscles. When the nerve dies the muscle is no longer energized by the nerve impulse from the brain. When the muscle is no longer energized or used, it slowly disappears or atrophies. It is for this reason that the PT and OT is very important for Wally. When the ALS started in Wally’s body, he was able to do some of the exercises by himself. However, his condition soon reached the point where we had to do the exercises for him.

Since writing the original biographical information about Wally on 9/10/05 the effects of the ALS have become more pronounced. At present, Wally is almost completely paralyzed. He has some mouth movement, eye movement, and slight movement in his rt arm which allows him to continue to FC with the help of arm and hand braces and support at the wrist and elbow. He continues to practice using his Tobii Eye Gaze computer so that when he can no longer FC he will be able to continue to communicate using his eyes.

In November of 2007, it became necessary for Wally to have a trach installed to help with his breathing. At that time he suffered pulmonary arrest and has been on a ventilator 24/7 ever since.

In April of 2008 Wally underwent emergency surgery to remove 2/3 of his small intestine because the intestine had become twisted. Wally has told us that since the portion of intestine has been removed he feels much better. One of the surgeons who treated Wally told us that the twisting of the gut might have been happening for years but because Wally was so active before the ALS, his jumping and running might have helped the gut right itself when these episodes happened. Wally had another emergency trip to the hospital during December of 2008 for an intestinal blockage. The blockage was the result of the medications used to treat the gut surgery of 4/08 slowing the transit action of the intestine too much.

In spite of the various medical emergencies and the pronounced effects of ALS, Wally continues to FC a few times per week and continues to practice on his Tobii eye gaze computer. He still enjoys listening to the music and talk radio stations; reading and being read to; and going for an occasional ride in the wheelchair van. He enjoys visits from his friends, family, and especially from his niece, Jenny-Adama, his nephew, Marcel, and his godchild, Carson Wallace. He is still able to smile with his winning smile and sparkling eyes, and continues to have a positive outlook on life.

Postscript: ”Wally passed away Monday, 4/6/15 at 3:30 pm eastern time. He was at home with his family around him. His doctor said that from what she could observer, she thought that Wally might have had either a stroke or a massive seizure early Sunday morning.  Yesterday, Monday, he went into a coma and died. We will certainly miss him and his wisdom.” (The parents of Wally)